Start a Wiki
Welcome dear guest, to the MODAO ZUSHI Fandom Site
Created by fans just like you, this site is dedicated to everything about the series Módào Zushi (魔道祖师) also known as Grandmaster of Demonic Cultivation. Expanding this wiki is very much welcomed and appreciated. All you need to do is create an account, click on the edit button on any page here and start contributing!
Policies Policy
Tread with caution:
you will be at risk of encountering many spirits and spoilers during your night hunts on this site!
Characters

Mo Dao Zu Shi d2
As the grandmaster who founded the Demonic Sect, Wei WuXian roamed the world in his wanton ways, hated by millions for the chaos he created. In the end, he was backstabbed by his dearest shidi and killed by powerful clans that combined to overpower him. He incarnates into the body of a lunatic who was abandoned by his clan and is later, unwillingly, taken away by a famous cultivator among the clans—Lan WangJi, his archenemy. This marks the start of a thrilling yet hilarious journey of attacking monsters, solving mysteries, and raising children. From the mutual flirtation along the way, Wei WuXian slowly realizes that Lan WangJi, a seemingly haughty and indifferent poker-face, holds more feelings for Wei WuXian than he is letting on.

The audio drama (广播剧) is based upon the original novel by Mo Xiang Tong Xiu. Produced by Polar Penguin Studios, its sole broadcast is on the Chinese audio streaming website MissEvans.com (猫耳FM).

Moxiang Tangxiu is a well-known BL web novel writer within the danmei community. Other works include her debut series Scum Villain's Self-Saving System written in 2015, and her most recent work Heaven Official's Blessing. All of her works have been signed to have a donghua and manhua adaptation, with MDZS also having an upcoming live drama.

She is currently working on a new series, The Grim Reaper Never Have a Work Break, and is yet to be published. 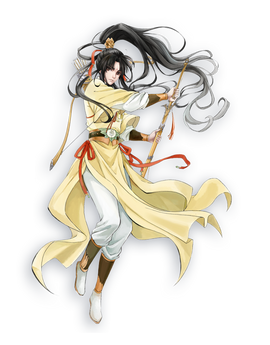 Atlatan, a land ruled by Chaos. Fearing disaster brought about by chaos, the people lived protected by “Lords;” those with the power of “Crests,” used to suppress the chaos. However, the Lords decided to abandon the concept of protecting the people and turn against each other, stealing each other’s Crests to gain dominion over one another. Among these people are Siluca, a lone mage who despises the Lords, and Theo, a vagrant knight training to someday liberate his homeland.

Retrieved from "https://test-me-pedia.fandom.com/wiki/Test_Me_Pedia_Wiki?oldid=2844"
Community content is available under CC-BY-SA unless otherwise noted.